PHOTOS OF MY BOOK LAUNCHING AT BIEL, FRIDAY 23, OCTOBER 2009
Stand: Librairie Orientale
Thanks to all who came and thanks to those who could not and apologized :) 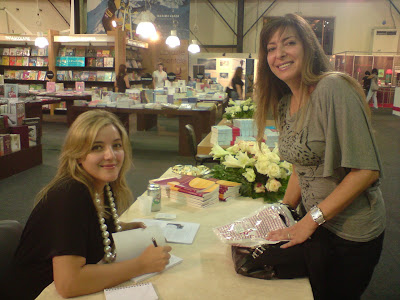 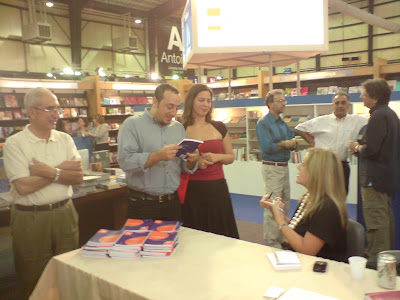 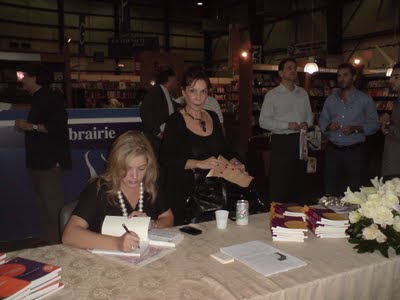 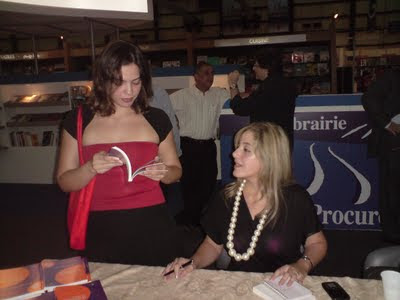 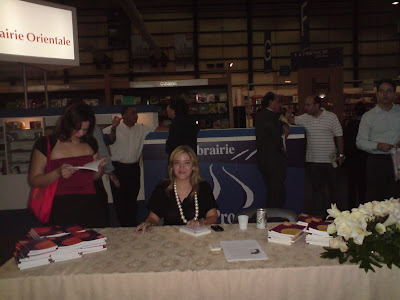 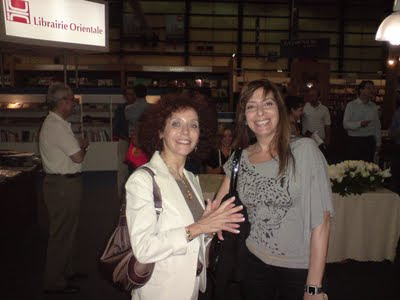 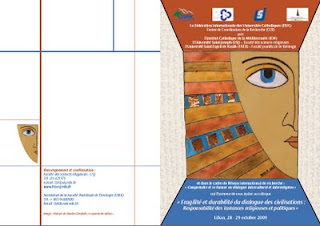 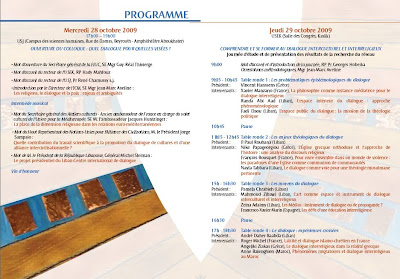 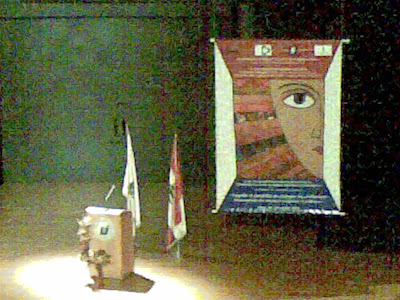 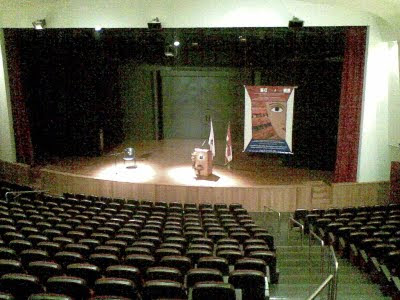 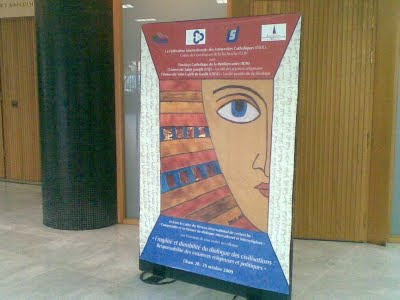 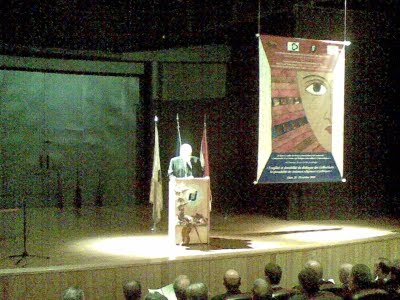 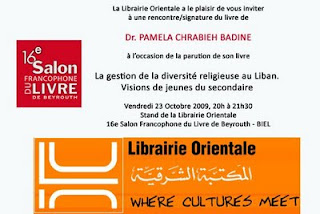 HOW DO I DEFINE DIALOGUE?

The word Dialogue or Dialog comes from a Greek word:‘dhialogos’ = dhia (through) and logos (word, speech): flowing-through meaning (not a monologue), or the word that is ‘heard’ (respected, taken into consideration, and leading to change/transformation).

“In true dialogue, both sides are willing to change.”Thich Nhat Hanh (Vietnamese Monk, Activist and Writer.)

The aim is not to change the other partner in the dialogue, but to risk being changed oneself through the process of mutual change that can be the result of a dialogue.

HOW DO I DEFINE PEACE?

As Dorothy Thompson, an American journalist - who was noted by Time magazine in 1939 as one of the two most influential women in America, the other being Eleanor Roosevelt - used to say:

"They have not wanted Peace at all; they have wanted to be spared war - as though the absence of war was the same as peace".

Living and doing dialogue began since my childhood in Lebanon, during the horrible physical combats’ period (late seventies – eighties). Extreme violence coexisted with a convivial reality, whether in our family, among friends, with our neighbors in the multi-religious villages where we used to take refuge, at school despite the decreasing number of students of different backgrounds and beliefs , etc. These layers of good memories and experiences have kept me and so many others hoping for a better future, refusing to let go of diversity and its richness. Layers that helped me commit more than ever to openness, respect, forgiveness and reconciliation.

Multileveled and Interrelated Commitment to Dialogue and Peace

One of my main involvements in Interfaith Groups was between 2001 and 2004 with ‘La Grappe’, an intercultural-interfaith-interfeminist or interfeminine group based in Montreal (Canada). My involvement was motivated by a desire to participate in an Interfaith/Interspirituality movement run by women for women. We used to gather each week, share our visions, beliefs and practices - Christians, Muslims, Hindus, Buddhists, Witches, Jews, Baha'is, Voodooists, etc. -, organize conferences, cultural events and exhibitions, including an important gathering of 150 women in June 2005 in Montreal along with 'Women doing Theology' Organization with the main theme: 'Creating Justice, Recognizing Differences'.

Recognizing Differences is a political as well as a spiritual aim. It makes links between the struggles against racism and sexism; it gives value to differences; it invites women to open themselves as women and as human beings, to question, to share - even if minimum agreements -, to change.

Working as a researcher and artist in a production team called ‘ELECTROCHOCKS’ (based in Montreal) which owner-coordinator is Director/Producer Nada Raphael and members are mostly women studying and/or working for Muslim-Christian relations in Canada and Lebanon.

Our current main project is 'Hyphen Islam-Christianity', a photo and painting exhibition and a 700 pages book (photos and testimonies gathered in more than 1200 villages in Lebanon and academic articles). This event was launched in Montreal within the 10th Edition of the 'Festival du Monde Arabe' (September-November 2009). It will also take place in Toronto, New York, Boston, Lebanon (Mid-November 2009 till March 2010), Paris (UNESCO), Geneva and Sydney. The Arab Group is one of Hyphen’s partners.

‘Hyphen Islam-Christianity’ is a live portrait of largely unknown landscapes, personalities and practices. Lebanon is a perfect example that illustrates the hyphen between these two religions because in spite of its small size and constant interreligious clashes, the common aspects and the bridging points do exist.

The development of women's involvement in dialogue (especially Interfaith Dialogue) and peace has been gradual yet significant. Especially in Western countries and in the South and East Asia regions. Middle-Eastern women have the capacities to follow this movement/trend, while developing discourses and practices adapted to their environments.

Unfortunately, we have to overcome many social and political pressures to be able to play a more effective and active role in our societies. These pressures are sometimes in compliance with religious traditions, but it does not mean that a solution would be to deny all the enriching religious values and heritage. When women from different traditions and religions meet, they can share their own experiences about being a woman inside their tradition, both the difficult and the empowering parts. The next step is that we go back to our own religious communities and address the challenges there.

There is an urgent need to stand together for women's participation on issues of national, regional, continental and international importance. Through our multileveled dialogues (Interfaith, Intercultural, Intergenerational, Inter-social classes,…), we can seek to establish a common agenda for the development of women and to ensure that women's views are taken into consideration whenever decisions are taken on all issues that impact on our lives. And even if we cannot establish this common agenda on a short term period, the process of dialogue is an aim in itself, where the participants should learn to respect and enrich each other in spite of, and because of the differences. Even if we have the same aim of making women visible and empowered inside the religious traditions, understanding the role and reason of being a woman may in practice take different ways. Even if we do not have the same concept of what it means to be a woman, we can challenge, enrich and empower each other. It can become an educational process in living in a plural society.

Last but not least, women living and doing dialogue is a must, but we should never forget that we are and we should seek to be partners with men, in order not to be considered as voiceless victims or enemies and continue on being marginalized, and because the well being of Humanity and the advancement of our societies are partly based on a productive cooperation/partnership/relation between genders.
Posted by Dr. Pamela Chrabieh at 10/08/2009 1 comment: