Religion and State Relations in Lebanon: Effects on Diversity

‘Religion and State Relations in Lebanon: Effects on Diversity’

Towards a Healthier Relationship between Religion and State, March 25 – 28, 2010 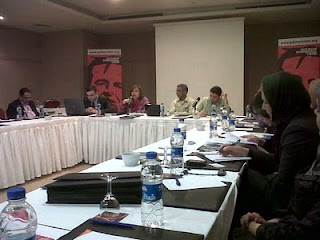 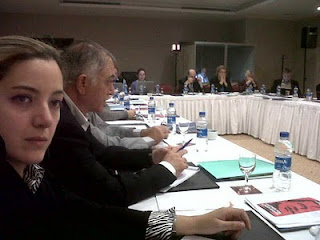 - For some, it is the ‘Lebanese natural condition’.

- For others, it has to do with ‘Sectarianism’.

1) It is the determination of actions, attitudes and practices by beliefs about religious difference, which results in their being invoked as the boundary marker to represent social stratification. Sectarianism is not necessarily synonymous with religiosity. One difference is that, while sectarianism may imply some intolerance of them (sectarian) "others" and encourage feelings of competition with them, religiosity does not necessarily imply intolerance.

3) It is a political system granting 18 sectarian communities political rights and privileges, on an equal basis between Muslims and Christians since the early 1990s, replacing the 6-to-5 edge previously held by the Christians.

For some, the roots of the system go back to the French Mandate (1920-1943); for others, to the 19th CE, under the Ottoman Empire rule. For most historians, the newly state of Lebanon in the early 20th CE was created with the interests of the Maronite Christian community in mind. France annexed Shia, Sunni and Greek Orthodox communities into the mandate regardless of the Sunni majority’s desire for unity with Syria. At the same time, France’s governance led to a reinforcement of the clientelist (za’ama) system already in place. Under this arrangement, community leaders emerged as patrons for the populace in their locality. These traditional, feudal rulers provided local, individual services on a personal level in exchange for the allegiance and loyalty of the masses. Often, the tight-knit communities that centered on an individual zaim were based on confession, or of clans that all adhered to the same religious doctrine. This family-based dynamic weakened the civil society of the fledgling nation, as no real relationship developed between the citizens and the central government. Because self-determination was essentially nonexistent, all political activities had a confessional overtone.

The first constitution written in 1926 did little to alleviate the situation, and instead included prescriptions for instituting a confessional system which continued to be further institutionalized until the present day. The National Pact of 1943 - a form of reconciliation between Sunni and Maronites -, the Taif agreement of 1989 - leading to Constitutional reforms -, and the inter-confessional or trans-confessional alliances - called ‘8’ and ‘14’ of March - since 2005 did not bring substantial changes/reforms in the structure of the system and its applications. On the contrary, sectarian laws and formulas were being cemented, e.g. the President of the Republic should be Maronite, the President of the Council of Ministers should be Sunni and the President of the Parliament should be Shia. During the past few months, several politicians called for political de-confessionalism as stated in the Taef agreement of 1989. But this step, if adopted, does not lead to a Secular system. Taef sent very mixed messages on this particular issue. It reformed political sectarianism by guaranteeing parity in Christian and Muslim representation. At the same time, it made a commitment of overcoming political confessionalism by calling for the creation of a council that would examine and propose the means capable of a progressive abolition. But it also called for the creation of a Senate where all sectarian communities would be represented and would have the right/privilege to tackle important national issues.

Advantages of the Social-Political System

According to some experts, Sectarianism as a political system has many advantages:

Implements consociative democratic mechanisms such as the consensus between all parties. No room for the democracy of numbers where a majority dictates its vision/practice on minorities.

Gives Lebanon a unique character in the Arab World by allowing a religious diversified society to exist while being managed by a civil ‘non-religious’ State which guarantees a balanced official representation of Islam and Christianity - Judaism being one of the three official religions but marginalized since the early 1980s.

Enforces and preserves dialogue and coexistence.

Disadvantages of the Social-Political System

For many experts, Sectarianism does nothing for Lebanon but creates more conflicts, for it involves a negative mixing of religion and politics by enforcing and reinforcing a mutual instrumentalization /utilization

It arises as a distorted expression of positive human needs, especially for belonging, identity and the free expression of difference. Indeed, it expresses in destructive patterns of relating: hardening the boundaries between groups, overlooking others, belittling, dehumanizing, or demonizing others, justifying or collaborating in the domination of others, physically intimidating or attacking others, etc.

It marginalizes any form of civil and secular identity to be integrated and recognized.

• Pro-Sectarianism (keeping the system as it is or reinforcing it) – According to this vision, religion/sectarian community = culture / clash of cultures to coexistence of cultures (no common values)

• Pro-Reforms (undertaking internal reforms and/or reforms of the applications)

My vision – A Mediated System

• CONTRIBUTES TO INTERNAL PEACE – ENHANCES THE CULTURE OF PEACE BETWEEN DIVERSITIES

• As I see it and based on several ground researches undertaken in the past few years, a change is needed, but it should not put aside Religion or confine it to a private sphere.

• It has to manage it in a more constructive and open process, inclusive to all diversities, leading to the reconciliation of the legitimate concerns of Lebanon's various religious groups and the rights of all Lebanese to be treated equally. Fragmentation of knowledge, discourses and practices have to be overcome towards an encounter of differences.

— There is no consensus or no agreement on how to evaluate the current system and how to proceed. STATUS QUO – and the status quo cannot simply be decided against or be vetoed. Action must be taken if it is to change.

— Spaces’ of tensions leading to internal conflicts are threatening the relatively ‘stable’ situation. Spaces of conviviality (i.e. living together) do exist but need to be enlarged.

Towards a better management of diversity and ‘healthy’ relations between diversities?
E.g. of ‘Baby steps ‘

— Forming an Official Commission which will base its report on the outcomes of public debates, public hearing and academic applied researches with a particular focus on:

- Reaching an agreement on the advantages of the current system and on its disadvantages.

- Recognizing and promoting the plurality of diversities in Lebanon and in the Lebanese Diaspora.

- Tackling issues directly and indirectly related to the management of diversity’s– especially how Lebanon should manage its relations to its neighborhood and the impact of globalization.

- Identifying the basic components of the ‘revised/renewed’ system.

- This Commission would submit a report to the government including new law projects and practical recommendations .

In Quebec (Canada) for example, the Bouchard-Taylor Commission on Reasonable Accommodation of Minorities released its report in 2008, a year and three months after its creation by the Government of Quebec, and it included 37 recommendations such as: Suggesting that the government prepare an official White Paper on secularism (“laïcité”), that it promote interculturalism and provide better funding to diversity programs, that it provide training to institutions about best practices in cultural adjustments, that it do more to integrate newcomers into a French-speaking majority society and that it offer better protection to those newcomers against all forms of discrimination.

A New War between Lebanon and Israel?

Many are asking this question and many are trying to answer it. However, I think it is the wrong question to ask. Why? The State of Israel and Lebanon are still at war... A declaration of 'cessation of hostilities' (summer 2006) does not constitute a peace agreement. The question to ask is the following: will there be physical combats again? And the answer to this question: most probably 'yes'! Sadly, the saber-rattling between Israel and Lebanon lately has created an atmosphere similar to the one that preceded Israel's 1982 invasion.
Other questions would be: when? And how?
The answers to these questions are, in my opinion, unknown until the present day.
Living with uncertainty and insecurity is a burden Lebanese are carrying, but does it have to be a fatality?
The reality is that the future will reveal itself in its own time, and pushing for resolutions/solutions sooner than that is a good way to make mistakes.
I think we - as Lebanese - need to take this one day at a time. Because this condition/situation may extend for quite some time, we will have to build up our emotional/intellectual/physical strength. We will need to work at resolving important internal issues and work to be as honest as possible with all parties. None of this will happen overnight, but we can feel good about ourselves if we are working towards those goals.
Progress will not be linear. One day we will feel pulled more towards a vision/decision, the next day more towards others.
I am advocating dealing as constructively as possible with the realities of life situations that present uncertainties and create anxieties. In this situation there is not an exclusivity arrangement. The issue is readiness, not time!
Posted by Dr. Pamela Chrabieh at 3/15/2010 1 comment: 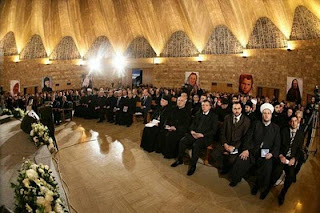 The main speakers of the meeting of 2010 will be:
Lech Walesa: Former President of Poland, Nobel Peace (1983)
Sheikh Malek al-Shaar, Mufti of Tripoli.


A PHOTO AND BOOK EXHIBITION (with the participation of Dr. Pamela Chrabieh Badine) will also be held as part of the festivities at Jamhour's College.

This prayer meeting and sharing will be followed by a series of official events and festivities at the Museum Square and Martyrs Square in Beirut!
Posted by Dr. Pamela Chrabieh at 3/11/2010 2 comments:

Towards a Healthier Relationship between Religion and State