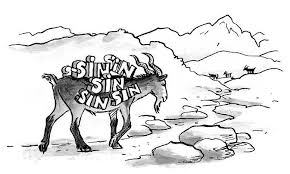 The latest events occurring in Lebanon following the explosion at Achrafieh, violent demonstrations in Beirut, clashes in the city of Tripoli and hatred between supporters of 8th and 14th of March political movements, reminded me of the theory of Rene Girard on mimesis, violence and scapegoats.


According to Girard, much of human behavior is based on mimesis, an all-encompassing expression of imitation. He describes a situation where two individuals desire the same object; as they both attempt to obtain this object, their behavior becomes conflictual, since there is only one object. Violence is generated by this process; or rather, violence is the process itself when two or more partners try to prevent one another from appropriating the object they all desire through physical or other means.  However, they often deflect their destructive energy from one another onto a substitute… The Scapegoat. Anger and hostility must be vigorously dispersed or vented according to Girard. A dramatic and cathartic event must occur: the destroying of the scapegoat.


Try to apply this theory on the Lebanese case:


2) However, it becomes more dangerous when rivals or enemies desire the same object – in Lebanon, political power. The Scapegoat  would be the Lebanese people – at least individuals and communities who are vulnerable and close at hand, more easily persecutable, with no direct bearing on the problems that are causing national disturbance, but bearing the signs of the victims. Unfortunately, the scapegoat does not disagree with the charges laid against him/her. He/she believes the charges.


One might criticize Girard's theory because it proposes conflict and rivalry as a core interpersonal dynamic. It is difficult to imagine that cooperation would ever be able to occur in such a situation. Girard doesn't propose a mechanism that would account for general cooperativity found in communities and one might not expect as much since his purpose is specifically to elaborate mechanisms of conflict. However, his theory does at least describe the phenomenon of cooperation, especially in relation to the community persecution of the scapegoat.


In conclusion, one should bear in mind that:


1)      to dispel violence, the scapegoaters must know and understand that they are being scapegoated.


2)       peace achieved by the scapegoating process is not lasting, nor is it ethical. The process itself lays the seeds for future violence and embeds patterns of violence within the framework of a nation’s ritualized processes. Violence begets violence! As I see it, conflicts are resolvable by means of transformation, mediation and compromise rather than violence.
Posted by Dr. Pamela Chrabieh at 10/22/2012

Dr. It is quite an interesting analogy :) Keep it up!

Can I ask you what is your opinion concerning the near future of Lebanon?

Not good if conflicts and tensions are not well managed. Let us not forget about the foreign interference as well.

It was a excitement locating your site yesterday. I came here right hoping to learn something new. And I was not dissatisfied. Your well thought out ideas for new events like this. Thank you for this idea and sharing your knowledge.

So we are all scapegoats?

I love your work Dr!!! Always following your posts!