The American University in Dubai (AUD) and the British Society for Middle Eastern Studies (BRISMES) invite submissions for paper presentations for a conference on Re-Locating Middle East Studies:  New Geographies of Discourse to be held on April 16th-18th, 2015 at the AUD.  The conference is being organized by the Middle Eastern Studies Program of AUD’s School of Arts and Sciences.
The BRISMES/AUD 2015 joint conference welcomes papers on any aspect incorporating new approaches to Middle East Studies and will also consider papers on other related topics. The provisional sessions for the conference, which will explore a wide array of disciplines and sub-themes, are set out below. 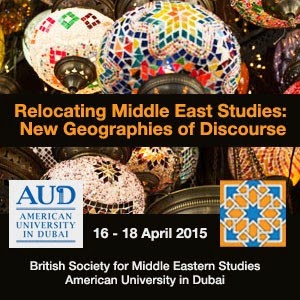 Conference Sessions with AUD Chairs
·         Negotiating Modernities and the Contemporary in Visual Culture
Contemporary visual culture and art practices from West Asia and North Africa often challenge notions of national boundaries, thereby generating new configurations of cultural geography. This session aims to reframe the evolution and stakes of visual culture by considering alternative modernities as well as contemporary art practices. By exploring art practices, museology and heritage conservation, the session intends to widen our understanding and analysis of contemporary cultural practices beyond binary discourses of “national” or “imported” modernities.  The session will also investigate complexities of artistic interactions as a major factor in the dynamic development of visual culture in this region.   Chairs: Dr. Nadia Radwan, and Dr. Woodman Taylor
·         Re-readings / Re-takes; Narratives in Literature and Media –
Developments in information technology and social media have transformed forms and formats of both literature and traditional media. This session will focus on new forms of literary narrative and media. This includes, but is not limited to, various genres such as the novel and short stories. In addition, the session will address transformations in the realms of film, TV and web content, as new platforms for media, especially in the wake of the so-called “Arab Spring.”
Chairs:  Dr. Fadi Haddad and Dr. Nadia Wardeh

·         Transdisciplinary Studies of Women and Gender in West Asia and North Africa
Although women and aspects of gender in West Asian societies have been researched for some time, this session will focus on new contextual studies that cross disciplines. This includes new approaches to contemporary constructions of gender as well as the intersection of gender with other categories of analysis, including identity, religion, politics, law, media and literature.
Chairs:  Dr. Moulouk Berry and Dr. Pamela Chrabieh

·         New Dynamics in the Economies of West Asia
Over the last three decades, West Asia has seen the rise of Islamic capitalism, which often is considered key to undermining extremism in the region. This new position of Muslims in neo-liberal market economies will be the main focus of the session. It will investigate how Muslims integrate themselves into global markets while maintaining their religious identity.
Chair: Dr. Basak Ozoral

·         Fluctuating Geopolitics of West Asia
In this past decade West Asia has been the site of extreme geopolitical challenges, from major external invasions, a global financial meltdown, to internal fissures and revolts.  Increasingly it is apparent that the old ‘Middle East’ is being transformed into new geopolities.  What new and innovative strategies are available for us to understand the rapid and varied pace of change in West Asia?
Chair: Dr. Magdy El-Shamma
·         Social Change, Justice and Transnational Forces in West Asia
From the flows of capital to ideas, conflicts and refugees moving across borders, the impact of transnational forces on the states and societies in the West Asia is greater than ever. This session invites papers dealing with transnational actors, forces and processes responsible for sweeping changes in the West Asia and their implications for social justice, economic prosperity and peace in the region.
Chair: Dr. Deniz Gökalp

Underpinning new approaches to Middle East Studies (MES) is a shared conviction that the label “Middle East Studies,” following Edward Said’s critique, is problematic.  In academic domains, MES departments are expected to incorporate the vast scope of Western scholarship on the cultures, religions, political systems, economies, ethniticies, literatures, arts and languages of countries ranging from Morocco in North Africa to the borders of India in South Asia – without any unifying logic for doing so.
As part of the same problem, MES is traditionally divided along geographical lines, with positions in MES departments based on specific regional boundaries.  While useful at the level of departmental organization, this places the generalist at a disadvantage while often obscuring the historical interactions between the areas under study.  Perhaps the main problem is that many of the region’s geographical borders are recent and, to varying degrees, arbitrary.  The histories of the inhabitants residing within these borders include countless interactions – borrowings, alliances, clashes – with other peoples and civilizations, whose histories have been severed from theirs.

A growing number of scholars within MES circles strive to subvert this static presentation of North Africa and West Asia by focusing on the flow of ideas, people, and products across regional boundaries.  Exploring networks that expand well beyond national borders, these scholars demonstrate impressive sensitivity to the geographical visions of the peoples they study.  They realize that concepts and languages traverse national borders thereby creating new and transnational communities.  Similarly, new studies of Middle Eastern economies show their integration into a wide variety of global markets.  A growing body of literature, given added impetus by the Arab Spring, studies the movement of religio-political ideas across the region.  The nature of such inter-regional flows is often determined by modern social media (internet, blogs, Facebook, Twitter, and so forth).  There now is a strong interest in analyzing the impact of these media on cultural, political, educational and artistic circles.

While many scholars explore the flow of ideas across regions, others continue to focus on geographically defined setttings, yet explore the creation of new spaces within these settings.  Gaining momentum in the aftermath of the Arab Spring and adapting approaches from post-colonial scholarship, this kind of approach explores how the recent, often violent jostling of established structures and hierarchies has created new spaces, or interstices, within the religio-political, and cultural fabrics of many societies in North Africa and West Asia.  One characteristic of these spaces is the emphasis placed within them on the language and symbols of tradition, orthodoxy and authenticity.  At the same time these spaces provide room for fresh modes and syntheses of thought and expression.

The crossing of geographic and institutional boundaries, external and internal, provides the focus for many of the new approaches adopted within MES.  Cross-fertilization within the academy is evident in the growing number of interdisciplinary studies in this field.  For instance, the work of political analysts is now enriched by the applications of diverse methodologies and data drawn from the fields of anthropology, history, and economics; while the research of classical textual scholars reflect ideas borrowed from modern literary criticism; and experts on religion are increasingly situate their scholarship within an anthropological and/or comparative religions’ framework.  In terms of creativity and results, this recognition of the importance of scholarly interdependence and co-operation signals a paradigm shift for studies of these regions.

With much of contemporary North Africa and West Asia in a state of flux, the theme of “Re-locating Middle East Studies” is clearly topical.  Given that, to date, MES scholars have dedicated most time and attention to traditional cultural and political centres in the region – Egypt, Iran, Lebanon, Palestine, Saudi Arabia, Turkey – hosting a conference on this subject in the United Arab Emirates, where comparatively little research has been carried out, suggests a pleasing symmetry:  if Middle East Studies is changing, so too are the location of – and forums for – its discussion.

A Visit to the Women's Museum in Dubai

Amazing fieldtrip with my ‘Women and Gender in the Middle East’ students (American University in Dubai, Middle Eastern Studies Division)! We explored a unique cultural space in the Arab world where UAE women’s lives and achievements are celebrated.
The Women’s Museum was established by the Emirati professor Rafia Ghubash in 2012 in order to preserve the history of women in the UAE and break down stereotypes and reveal the extraordinary role that women have played in defining their culture and shaping their society, from Sheikhas to pioneers in education and business, and poets. A special hall is indeed dedicated to the heritage of the renowned poet Ousha Bint Khalifa, known also as ‘The Girl of the Arabs’.
Donated art work and artefacts include photos from those living in the area, showing how women were able to read and write contrary to many expectations, and land documents showing how women bought and sold land, and had businesses, from as early as the late 1940s and 1950s. The second floor includes a women’s studies center, featuring walls covered with bookcases full of literature written by Emirati women, and a gallery featuring local and international work by both men and women.
Visiting the Women’s Museum was an important informal learning experience for students. It exposed them to in-depth information on the UAE society and the role of women in its development. It also allowed them to connect with Emirati women who are contributing to share this information, and to discuss thoughts and opinions.
The Women’s Museum in Dubai is one of only four in the world which focus on women’s heritage. The museum foregrounds the political, economic and intellectual achievements of women, rather than just what people first assumed it would be about — perfume, makeup and clothes.
A first visit for AUD MEST students but certainly not the last! 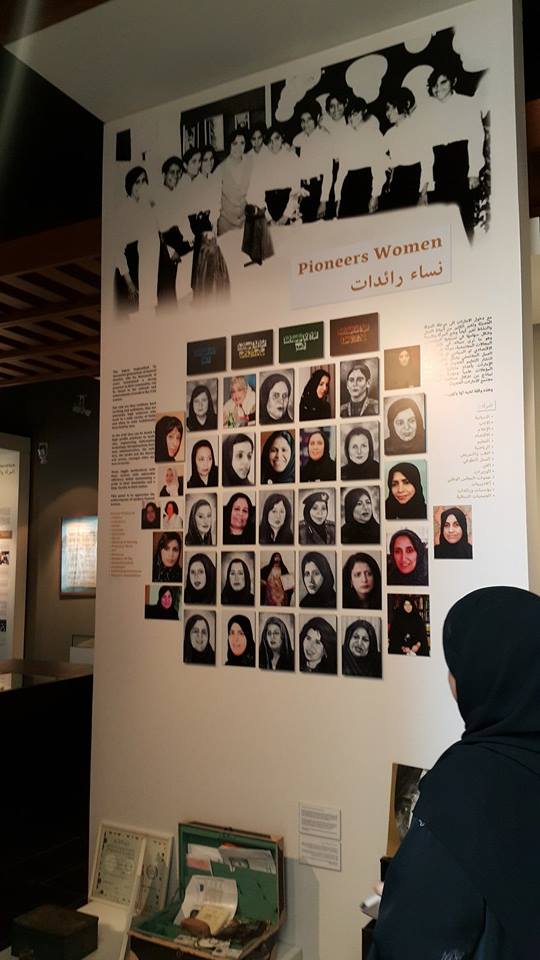 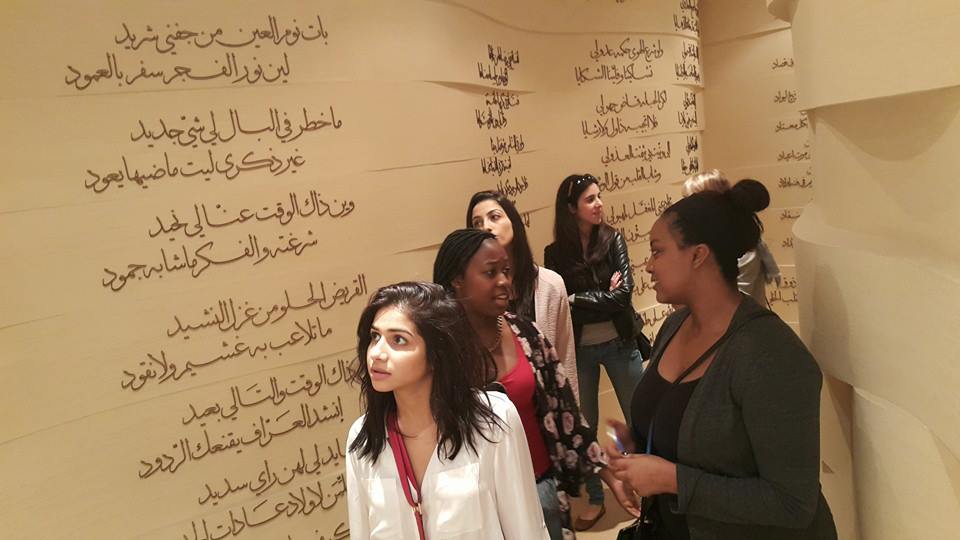 Special hall dedicated to the poetic heritage of the renowned poet Ousha Bint Khalifa, also known as ‘The Girl of the Arabs’. 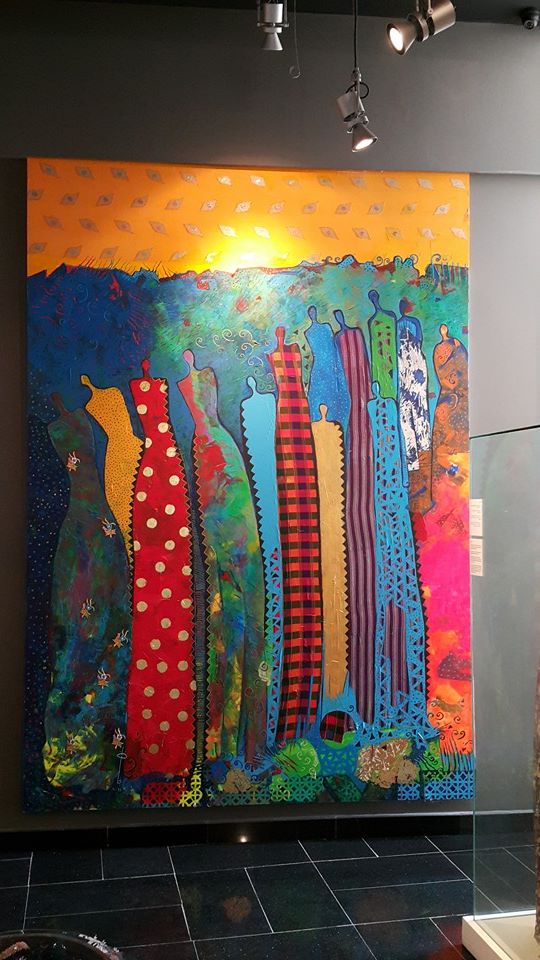 Beautiful artwork by Dr. Najat Meeki, a distinguished artist who is finely tuned into her local environment.
A tribute to Emirati women! 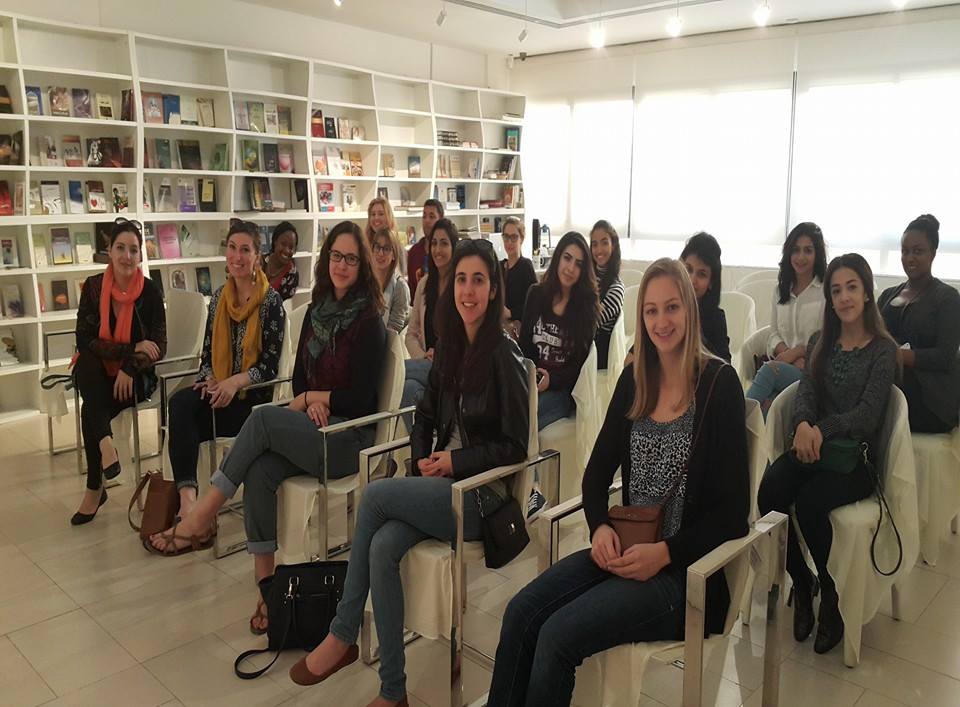 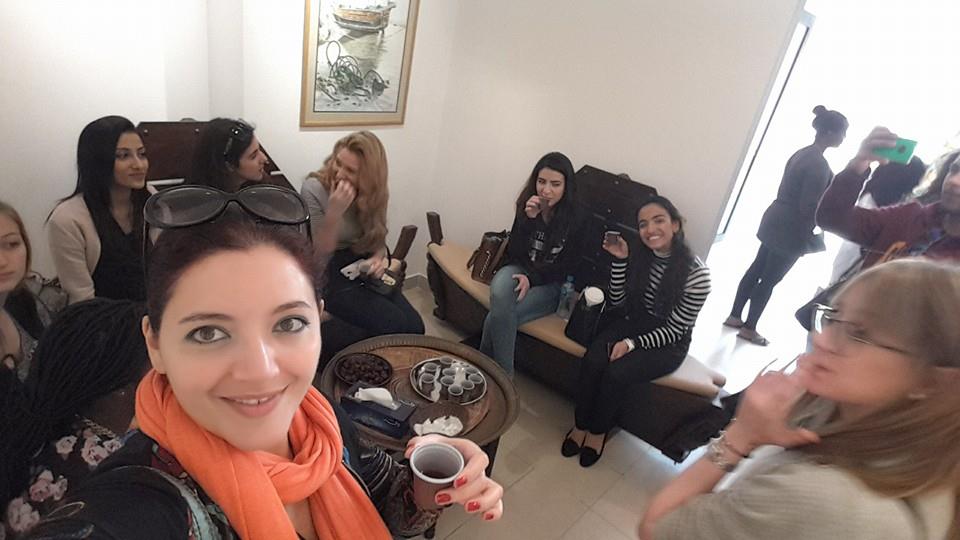